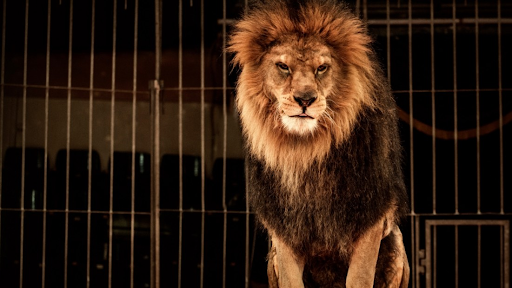 “He who is cruel to animals becomes hard also in his dealings with men. We can judge the heart of a man by his treatment of animals.”   –Immanuel Kant

Everyone loves puppies and pets. Ours is a pet-loving culture where millions of people in the U.S. share their household with hamsters, horses, dogs, cats, reptiles, and aquatic animals. There are studies done by the CDC showing how having an animal as a pet could benefit human health and well being. We interact with various types of animals as we grow up. As children, we have visited farms, stables, parks, zoos, and even attended circuses where they showcase wild animals for our entertainment. As much as we love to watch and get closer to these animals, there is a dark side to it. Animals are exploited and abused in a variety of entertainment. In circuses, tigers, lions, and other animals are sentenced to a lifetime of suffering and misery to provide few moments of delight to humans.

Using animals for the entertainment of humans has been going on since the times of the Roman Empire. Back then, “under Roman law, animals, like slaves were without rights They were regarded as creatures having been created only for benefiting humans, a belief that still persists to this very day” (The Rose-Tinted Menagerie). Colosseums were built where gladiators were forced to fight with animals, endangering both humans and animals, again for the purpose of entertainment and amusement of humans. To this day, you can draw parallels with bullfighting in Spain, where a matador mercilessly kills the bull. As mentioned in “Animals in Entertainment”, “In the U.S., circuses with wild animal acts began forming in the late 1700s and the first American zoo was established in Central Park in 1864.”

Today, animal entertainment exists in various forms. The real reason for the more obvious types of animal entertainment, such as circuses and animal racing, is profit. There are other forms of animal entertainment industries that exist around the world for the same reasons: Camel racing in the Middle East, Greyhound dog racing the US, animal fighting, horse racing, rodeo, the Iditarod that takes place in Alaska (Dozens of dog sled teams race approximately 1,100 miles from Anchorage to Nome in pursuit of prize money). Like all businesses, these operations exist to make money from ticket sales, betting, or the sale of merchandise. The welfare of animals in such venues is secondary to turning a profit.

There is a silver lining though: “Passed in 1966 and amended several times since, the federal Animal Welfare Act AWA is a set of laws that govern the ways animals are acquired, transported, housed, and treated [..in] entertainment” (Animals in Entertainment). The Secretary of Agriculture is authorized to set humane standards for the use, care, and transport of animals in zoos, aquariums, and circuses. The law restricts exhibiting or sponsoring animals in fighting ventures (e.g. dogfighting or cockfighting) and the transport of animals across state lines for such purposes. However, the AWA laws are operated at a federal level and the AWA does not extend protection to any animals used in state or county fairs, livestock shows, or rodeos. For that, all 50 states have animal anti-cruelty laws. Beyond the government, there are organizations that are dedicated to animal welfare and protection. The Humane Society of the United States (HSUS), established in 1954, is the world’s largest animal protection organization. Working with veterinarians, teachers, and other professionals, The HSUS seeks to help animals through investigations, legislative and consumer advocacy campaigns, and a variety of animal protection programs.

As individuals, we can get involved and can take action against animal cruelty. First is to get educated about the issue in depth. Visiting websites like “humanesociety.org”, “wildlife-rescue.org”, or “mspca.org” (More listed below), one can start understanding issues and have access to resources to take action. After 36 years of protests against animal cruelty, some famous circuses have shut down such as The Ringling Brothers and The Barnum & Bailey Circus. All states have animal anti-cruelty laws. Some states and counties (Hawaii and New Jersey) have bans on entertainment acts that use wild animals. Find out what animal-related laws your state or town has in place. You can gather information by visiting your state’s official homepage. You may also investigate your state’s laws at “www.AnimalLaw.com”, which includes a searchable database of animal-related laws. To learn about ordinances in your city or county, contact your local government.

Common questions to ask are:

You can also join organizations like peta.org that can guide you on how you can help the cause. Progress has been made, but there is more to be done to end the cycle of animal abuse. With the help of government, private sponsors, community, and individual efforts one can really make a difference. The ultimate goal is to have a little to no use of animals across all the entertainment sectors and beyond. For those who still use animals in entertainment, they need to follow the law and local code strictly.

“The greatness of a nation and its moral progress can be judged by the way its animals are treated” – Mohandas K. Gandhi.

This is my first article as a part of the Global Ambassador program. As an animal lover, I hope to spread awareness of this issue and inform the public. No matter where we live, who we are, or how many take action, every person counts in the fight against animal cruelty.   Let’s take care of our animals.

“Animals in Entertainment: Circuses, SeaWorld, and Beyond.” PETA, 2 Jan. 2020, www.peta.org/issues/animals-in-entertainment/.

THE BLOOD-RED MENAGERIE – The Circus in Ancient History, www.iridescent-publishing.com/rtm/ch1p1.htm.

team, Sentient MediaSentient Media editorial. “What Is Animal Cruelty and How Can We Stop It For Good?” Reporting on Animals, Animal Rights, and Human Choices, 17 Dec. 2019, sentientmedia.org/animal-cruelty/.

[By Sara Phondge , is Global Awareness Ambassador from New Jersey]