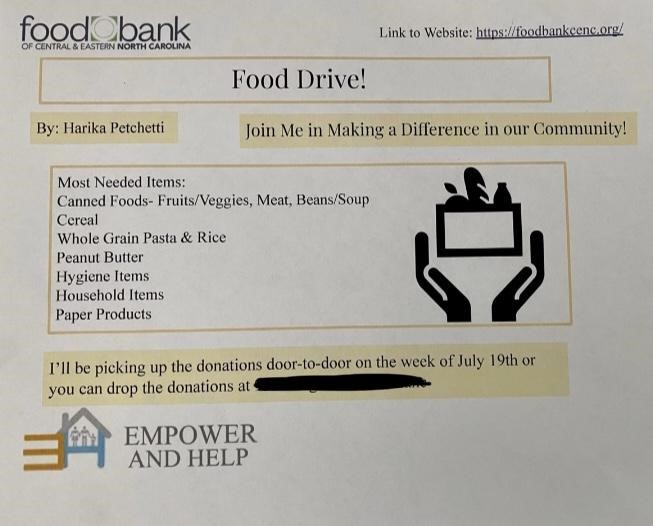 When I first found out about the Empower And Help Ambassador Program, I decided that I would do some good for my community as an ambassador. I discovered that there was a way I could do just that, I could start a community drive. I decided to do a food drive because it is the most valuable resource that people can benefit from. As I dove deeper into research, I began to feel thankful for the prosperous upbringing. Like all big projects, this had its ups and downs. But then I would think of the many people whose lives I would make much better, and that feeling would keep me going. What may seem like a bit of an act to us could change someone’s life.

I had a plan, and now I just needed to find a local food bank to collect and distribute my food drive donations. I was stumped on this one for a while. I didn’t know any food banks here in Raleigh, but my mom told me about the Food Bank of Central and Eastern North Carolina. I thought it was a fantastic choice, so I went to the website and researched it some more. I noticed that they had different drop-off centers, which allowed me to go to the one closest to me. I emailed them and booked a week to drop off my food. It was surprisingly more straightforward than I thought!

Now that I had the dates set, I just had to get the food. Many people may think that this is the hard part, but it’s not! You’d be surprised how many people want to help their community. I made and printed out flyers and then handed them to everyone’s doorstep in my neighborhood. My mom also shared the flyer with some of her friends to donate to us. I remember the first donation I received was from a lady from my neighborhood who I had never even met. She gave many donations, which I knew could help so many people. I was so grateful to her, especially since she was the first to offer. After her, many people dropped their food donations off at my doorstep. I even saw some of my friends!

I made sure to profusely thank everyone who donated to me because I was so grateful for their help, and I could never have done it without them. I dropped off a handwritten note and dropped it off in front of everyone’s doorstep. I believe this entire experience brought my neighborhood a lot closer together.

Finally, I would give my donations to the drop-off center in Raleigh. This was the hardest part. Just loading all the supplies, which weighed 54.1 pounds, onto the cart was so tricky. However, with my mom’s help, we finally finished loading it, and all we had to do was drag it to the facility. This stretch was the only thing between me positively impacting my community with the help of many generous donors. I pulled all the cans and boxes to the building with this determination.

Now, I would meet the lady who served us. She was so sweet and friendly. She was so impressed that I had done a food drive, and I was only 14. The total weight of all my donations was 54.1 pounds. I was pleased with this, and after leaving, I felt a sense of fulfillment in my soul that I had finally finished the task I had set out to do.

[By Harika Petchetti, is Empower And Help Student Ambassador 2021 from North Carolina]