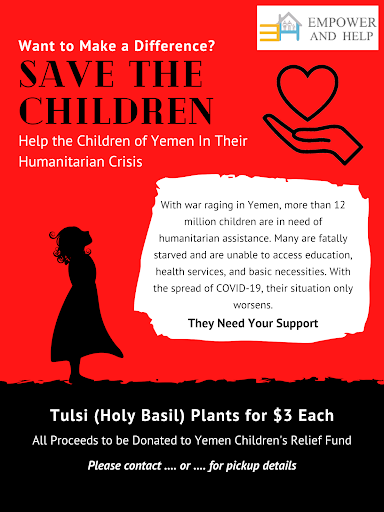 When it comes to raising money for a certain cause, community fundraisers are commonplace. Nonetheless, ensuring that the fundraiser will be successful is a process that takes time and patience. By running the Save the Children fundraiser in my community, I learned how to properly promote a cause, get orders, and stay organized throughout the whole process.

To begin my fundraiser, I decided the first step would be to choose a cause to contribute to. When I was given the opportunity to run this drive, I did not have an organization in mind. I searched the internet for an organization that would be worth supporting, and finally, I ended up on Yemen Children’s Relief Fund. This cause was one that really resonated with me, and I knew that the afflicted children in Yemen, who are malnourished and do not have access to necessities, would greatly benefit from the donation.

After choosing the organization, I drafted a flyer to share with my friends, family friends, and community. In this flyer, I made sure to include information about the children in Yemen and the humanitarian crisis they are suffering in order to motivate viewers to take action.

I then received 53 Tulsi plants from a donor and made it my goal to sell all of them. I planned to donate all the proceeds from the sales. I did not have a set amount of money in mind, but as all my plants were priced at $3, I predicted that the total would be $159. However, several of the customers were very enthusiastic about this cause and chose to donate $5, $10, or in one case, $50, for a single plant. In the end, I collected a remarkable $400 to donate to Yemen Children’s Relief Fund.

The target audience for this fundraiser was the Indian community in my area. The Indian community is the main consumer of Tulsi plants, therefore I made most of my sales attempts in different Indian community group chats and social media groups. As I had predicted, the majority of my sales were to Indians. Nonetheless, I found that some people, who did not know what Tulsi was or did not specifically want one, still bought a plant to support the cause.

In my experience, the most difficult part of the process came after I had shared the flyer and received orders from my close friends and family friends. I had to figure out a way to sell the rest of the plants, but to do that, I had to convince people whom I did not know that my cause was worthy of their contribution. Of course, I posted the flyer on my social media platforms- Instagram, Snapchat, and Facebook. However, I did not receive any inquiries from the avenue. From what I learned, the best way to get an order from someone who was not particularly looking to buy a Tulsi plant was to contact them directly, via text or direct messaging. This persuaded them to actually consider the cause rather than ignore it as they scrolled through their social media stories.

In addition, I found that these tips were the most helpful in contributing to my success:

Likewise, another matter that I had to stay on top of was organization. When running a fundraiser, business, or organization that deals with receiving orders and making deliveries, staying organized is essential. To resolve this issue, I decided to create a spreadsheet with every order, the number of plants ordered, and the amount donated. I made sure to color coordinate depending on the customer’s payment and or delivery status. This helped me visualize my status and, overall, made this whole process easier and more efficient.

As I neared the end of the fundraiser with 20 plants left, it became difficult to find people who were willing to contribute. I then shared the flyer with my friends again, but that time, I asked them to share it with people they knew. I got my remaining orders from these friends of friends, as well as a few people in my neighborhood. Another viable option, which I did not pursue, was selling the Tulsi plants at a stand outside my local farmer’s market or Indian store. Despite the fact that the store was also selling Tulsi, the idea that the money would be going to charity would likely motivate shoppers to purchase the plant for my cause. If I had more plants, I would have explored that option.

This fundraiser was my first action as an Empower and Help Global Challenge Ambassador. Since becoming an ambassador, I have constantly been thinking of new ways to give back to my community, as well as involving them in supporting communities around the world. After learning about the crisis in Yemen, I was especially touched and decided that I wanted to do something to help this cause. From this experience, I not only learned about plant care, but my marketing, organization, leadership, and people skills have all greatly improved. Although I started this fundraiser to help the children of Yemen, I also ended up helping myself. Change is built on the efforts people make, no matter the magnitude, to bring people together and raise awareness. Whether it is by joining Empower and Help or making a difference on your own volition, I strongly encourage others to take action in their community to spread positivity and promote change in what they believe in.

[By Riya Prakash, is Global Awareness Ambassador from New Jersey]

2 thoughts on “Save the Children: A Community Fundraiser”