Yemen, a Middle Eastern nation, has been struck with “the worst humanitarian crisis,” according to the United Nations. Millions of people do not have access to basic resources including food, water, and shelter, and over 80% of the population is in desperate need of humanitarian assistance (Yemen crisis: What you need to know, UNICEF). Hospitals are being shut down, and the number of detention camps and casualties are increasing; this is taking an enormous toll on the economy and on the people, who are being affected both mentally and physically. UNICEF claims that the ongoing war, as well as the COVID-19 pandemic, has resulted in “a living hell for the citizens of Yemen.”

The Yemeni people have been suffering an ongoing war, known as the Yemen War. It began when President Ali Abdullah Saleh was forced to give up power after 13 years of presidency to his vice president, Abdrabud Mansur Hadi, as a result of an uprising in 2011. However, the switch in power did not bring political stability and instead provoked even more violence. The Houthi Shia Muslims, an Islamic minority (supported by Ali Abdullah Saleh), started an armed movement in Yemen and took over the capital city Sanaa, from the Sunni Muslim government, controlled by Abrabud Mansur Hadi at the time. This resulted in President Hadi being forced to flee to Saudi Arabia. Saudi Arabia suspected that the Houthis were backed up by nations and organizations including Iran, the Gulf Cooperation Council, the U.S., France, and Britain. This led to them to start an airstrike on Yemen, killing and wounding at least 200 people. The Yemen Data Project recorded more than 17,500 civilian casualties and stated that “a quarter of all civilians killed in air raids were women and children” (World Report 2020 “Yemen Events of 2019”). The Houthis and Yemeni government have detained many people including women and children who are held in impoverished areas. According to Human Rights Watch, “Former detainees described Houthi officers beating them with iron rods and rifles and being hung from walls with their arms shackled behind them.”  In such detention facilities, torture, sexual assault, and other forms of ill treatment are extremely common. The deadly war has remained in a continuous stalemate, although many of the wartime detention camps still exist. Due to their unhygienic nature, they are a source for the spread of the coronavirus.

Abdulla Bin Ghooth, a 55 year old Yemeni man complained of having a fever along with shortness of breath; it was likely that he tested positive for COVID-19, but he was sent home with an oxygen cylinder as the hospital staff were not properly equipped and afraid to catch the virus. Three days later Abdualla Bin Ghoot passed away according to an epidemiologist at Hadhramout University College of Medicine. Evidently, the healthcare industry has completely collapsed in Yemen because of the pandemic, along with the war. Hospitals are closing down for the safety of their employees and because of the lack of funds. A week before COVID hit, around 10,000 healthcare workers lost their salaries while low testing capabilities continue to make it even more difficult to protect the citizens. Aden, a Yemeni city with a population of over 800,000 people, has only 18 ventilators, which is far fewer than the number needed to protect the citizens from getting ill. According to UNICEF, “As the coronavirus spreads, an additional 30,000 children could develop life-threatening severe acute malnutrition over the next six months.” Hassan Merzan, a ten year old child, weighs only nine kilograms. “My son is sick and I don’t know where to take him. He has a fever and I’ve nothing to treat him, I can’t even get water,” said his mother Zaina Merzan, who has six other children ( “Yemen’s children starve amid rising fears of famine”). Many Yemeni children like Hassan Merzan are malnourished and unable to receive proper treatment due to COVID-19 and the measures that are being taken to prevent it. Many citizens, including the Merzan family have lost their jobs and are struggling to provide for their families.

Nonetheless, there is a way to help the Yemeni people get through such an arduous time. So far, the United Nations has been able to raise 1.35 billion dollars, which is far less than the 4 billion dollars needed to help Yemen. Educating yourself and others about the current crisis and donating to organizations including the World Food Program, UNICEF, and local fund drives can make a major difference. An ambassador who is a part of the Empower and Help organization sold Tulsi (Holy Basil) plants locally for three dollars each and donated the proceeds to the Yemen Children’s Relief Fund. A three dollar donation can make an immense impact on the lives of not only gardeners and donors who receive this delicious food, but also on the struggling Yemeni citizens. Making your own local fundraiser and donating the revenue to a trusted organization is another way to help the current crisis. Yemen’s ongoing war and broken healthcare system, coupled with their lack of resources is a result of the ongoing war in conjunction with the coronavirus pandemic. Together, we can work to assist the Yemeni people who are living in such a perilous economy. 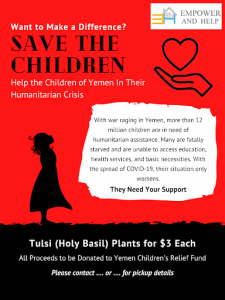 As a Empower And Help ambassador, I feel it is my duty to spread awareness about the Yemen crisis. What is happening to the Yemeni people is unfortunate and they are in need of immediate assistance from people all around the world . I believe that spreading word about this crisis will urge more people to donate which will help the Yemeni citizens get out of poverty.

[By Meha Datla, is Global Awareness Ambassador from North Carolina]

4 thoughts on “The Yemen Crisis”