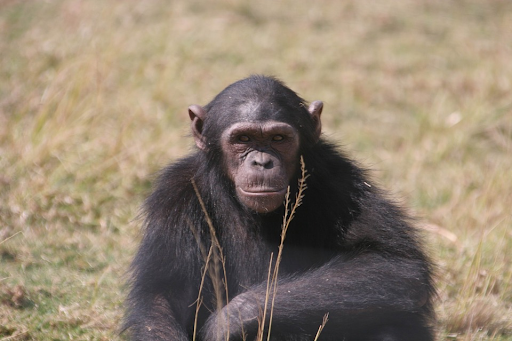 “Only if we understand, can we care. Only if we care, will we help. Only if we help, we shall be saved”. This is a quote from Dr. Jane Goodall, a conservationist who spent years living with Chimpanzees and studying them. This quote also describes the topic for this article, Wildlife Conservation.

What is wildlife conservation?

Wildlife conservation is the practice of protecting endangered species. Endangered species are genera that are close to extinction. An example of an animal that has been saved from extinction is America’s national bird, the bald eagle. It almost went extinct because of habitat destruction, illegal hunting, and contamination with the chemical substance DDT, otherwise known by the chemical name “Dichlorodiphenyltrichloroethane.” The bald eagle was saved by the ban on DDT in 1972 (“5 endangered animals saved by the Endangerment Species Act”). The most endangered land animal is the Amur leopard, with about 84 individuals living. The Amur leopard lives far east Russia and is a very rare subspecies. This subspecies of leopard is endangered because of the illegal wildlife trade; this means that people illegally hunt them down, then shed the fur before selling it to people for money. Thousands of animals need to be saved but aren’t; this is because of their habitats being invaded. With their homes destroyed, the animals move to different places, not knowing where they can relocate. Sometimes that species may end up in a place too cold or hot and die before reaching the end of that zone. There have been failures and successes in the field of wildlife conservation (“Species List”).

Why does wildlife need to be protected?

Wildlife needs to be conserved because if a species goes extinct in a specific environment, then the diversity rate goes down and the animals near it also start being endangered. We, humans, need various sources and energy to keep healthy, whether it be food or medicine. Similarly, plants and animals also need that diversity in their ecosystem to remain alive. In the end, the only organisms left would be humans, who will also go extinct due to a lack of resources. There are three main types of endangerment classifications, as shown in the graph below. The lowest category is vulnerable, which is 30-50% in population decline. The endangered class is in the middle, with a population decline of 50-70%. The class with the highest amount of population decline is critically endangered at 80-90%. The critically endangered species are those that need saving the most, and vulnerable species need the least protection. 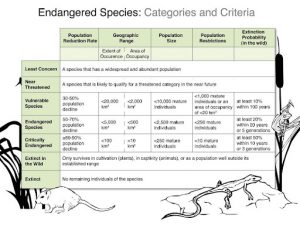 The animals on land aren’t the only animals that need to be saved from extinction; aquatic animals are also at risk of endangerment. An example of a marine animal that needs to be protected is the Ganges river dolphin. This dolphin, in particular, is endangered; they need to be saved because they are essential bioindicators* to the river ecosystem. In their role as bioindicators of the entire river system, they need to be protected from pollution and fishing nets, which the dolphins are caught through. Although there are very few critically endangered aquatic animals, there are plenty endangered, and you could save one of them.

The most endangered aquatic animal is the vaquita, with about ten individuals still living in the oceans that surround us. The vaquita is the rarest marine mammal, and it is on the edge of extinction. It is like this because of the illegal fishing operations using fishing nets around Mexico’s Gulf of California (“Species List”). The most endangered animals on earth have a population of fewer than 100 animals, which raises awareness among conservationists.

*Bioindicators: organisms that indicate whether an ecosystems’ environment is polluted.

How You Can Help and Fun Facts

Scientists do not know the exact numbers of a species. They predict when an animal may go extinct the same way they classify the animal. Using index fossils, scientists classify the animal to its species, as well as how long the ancestor had taken to go extinct and evolve. They also do not know every single organism; so many could have gone extinct or evolved without our knowledge. They keep a close eye on the ones they know of based on their predictions (“De-extinction”).

Scientists get the old DNA samples from the extinct animals’ fossils like bones, teeth, hair, and skeletons. Scientists are trying to bring back the wooly mammoth by using preserved DNA from a frozen wooly mammoth body. Every living species has a particular cell sequence called the genome. When the DNA of a certain species is found, scientists use it to reassemble its genome. Then, the extracted DNA sample is injected into the nucleus of a cell. It is then treated until the cell divides itself into an embryo. Once ready, it is inserted into the embryonic cell of a suitable, non-extinct, closest relative of the extinct species, called a surrogate (“De-extinction”).

Wildlife started receiving attention from the government and conservationists in 1967. A list was created that year called “The Class of 1967,” which included information on the seventy-five species under the U.S. Fish and Wildlife Service (“The Class of 1967”). But it was not until six years later that it came under law as “The Endangered Species Act,” this act’s purpose was to conserve endangered species from extinction. As a result of this act, we have wildlife refuges, some of which you can camp in. The Endangered Species Act is the reason we see some animals that could’ve been extinct. 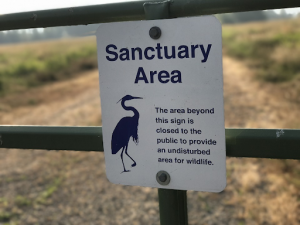 Wildlife refuges are places built to protect animals from going extinct. There are many around the world, some pertaining to a single animal and others an entire habitat. An example is the Wichita Mountain Wildlife Refuge in Oklahoma. Many animals disappeared from this area before the refuge was built, but bison, elks, and wild turkeys restored the area after it was built. There are many other refuges for aquatic and wildlife animals that help animals like those aforementioned.

Wildlife conservation is something that should be thought of more often. Sure, we all look for ways to save the environment, but many people focus on recyclables. Yes, that helps save the earth, but from the perspective of living organisms, they can use saving too. You can help save wildlife by donating or adopting an animal at the World Wildlife Foundation, using fuel-efficient vehicles, or throwing away trash in trash cans instead of the ground.

“5 Endangered Animals That Were Saved By The Endangered Species Act.” THE ENVIRONMENTOR, 20 Jan. 2021, blog.tentree.com/5-endangered-animals-that-were-saved-by-the-endangered-species-act/.

[By Ananya Bandaru, is Empower And Help Student Ambassador 2021 from North Carolina]